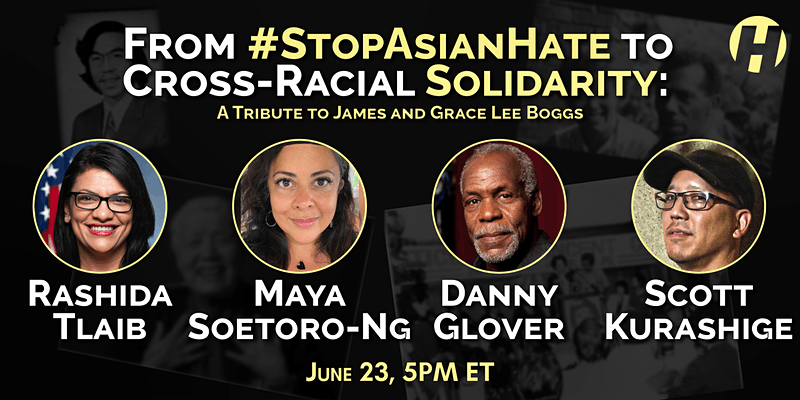 Join Rashida Tlaib, Danny Glover, and Maya Soetoro-Ng for a conversation on how we combat anti-Asian racism.

The national wave of anti-Asian violence and attacks has sparked an upsurge in activism and critical conversations about cross-racial solidarity. Join us as we discuss these issues in tribute to James and Grace Lee Boggs on the anniversary of the death of Vincent Chin.

Danny Glover is an award-winning actor, producer and humanitarian with a performance career that spans more than 30 years. Off-screen, Glover has gained respect for his wide-reaching community activism and philanthropic efforts. Internationally, Glover has served as a Goodwill Ambassador for the United Nations Development Program, focusing on issues of poverty, disease and economic development in Africa, Latin America and the Caribbean. He currently serves as UNICEF Ambassador.

Rashida Tlaib is a well-known progressive warrior and, in her own words, “a mother working for justice for all.” Rashida made history in 2008 by becoming the first Muslim woman to ever serve in the Michigan Legislature. She is beloved by residents for the transformative constituent services she provided, and for successfully fighting the billionaires and corporations that tried to pollute her district. She is currently the Congresswoman for Michigan’s 13th Congressional District, which includes the city of Detroit and many surrounding communities.

Maya Soetoro-Ng serves as a consultant to the Obama Foundation, working closely with their international team to develop programming in the Asia Pacific region. Prior to her work with the Obama Foundation, she was the Director of the Matsunaga Institute for Peace and Conflict Resolution at the University of Hawaii at Mānoa where, in addition to leading outreach and development initiatives, she also taught Leadership for Social Change, History of Peace Movements, Peace Education, and Conflict Management for Educators. Maya has published a number of book contributions as well as a picture book entitled Ladder to the Moon and is currently under contract to write a Young Adult novel entitled Yellowwood. Maya sits on many voluntary boards and is the co-founder of the nonprofit Ceeds of Peace, which creates peacebuilding action plan workshops for educators, families and community leaders and is the co-founder of the Institute for Climate and Peace which advances effective and inclusive processes to build peaceful and climate-conscious futures for the wellbeing of all.

Scott Kurashige (moderator) is professor and chair in the Department of Comparative Race and Ethnic Studies at TCU, president of the James and Grace Lee Boggs Foundation, and past-president of the American Studies Association. He is the author of The Shifting Grounds of Race: Black and Japanese Americans in the Making of Multiethnic Los Angeles and co-wrote the The Next American Revolution with Grace Lee Boggs.

This event is sponsored by the James and Grace Lee Boggs Foundation and Haymarket Books. While all of our events are freely available, we ask that those who are able make a solidarity donation in support of our important publishing and programming work.