Take 40% OFF Naomi Klein's No Is Not Enough

To celebrate 5 weeks on the New York Times Best Seller list, we're offering 40% OFF of Naomi Klein's new book, No Is Not Enough. Each paperback purchase also includes a free bundled e-book.

If you've been waiting to read it, now is the time! If you've already read it, pick up a copy for a friend, a relative, a comrade, or a co-worker. Please also help us spread the word by writing a short review on Goodreads and Amazon.

"Klein moves beyond mere outrage and hand-wringing to offer a practical manifesto for opposition.”
–Financial Times

"A blueprint for combating Trumpism and the corporatist policies of his predecessors that made his rise possible. With a genuine sense of hope, Naomi Klein illuminates paths to collectively forge an ecologically sound, anticapitalist order.”
–Publishers Weekly (Starred Review) 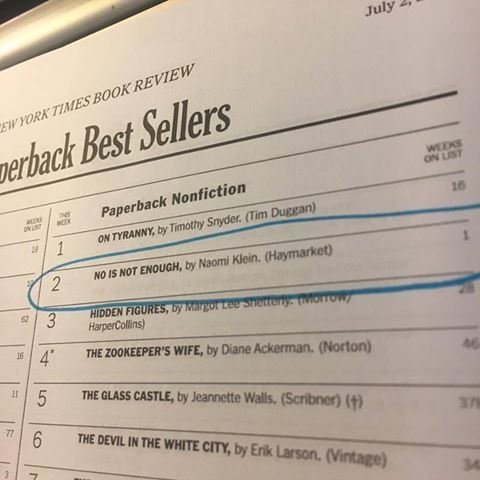 "In No Is Not Enough, Naomi Klein anatomises the roots of Trump in the already dystopian world of corporate-ruled America and predicts the “end run around democracy”. A clear and readable guide to action, if it is action you are contemplating.”
–Paul Mason, The Guardian